started a topic about 4 years ago 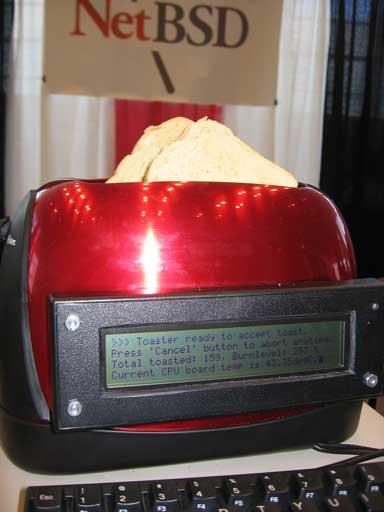 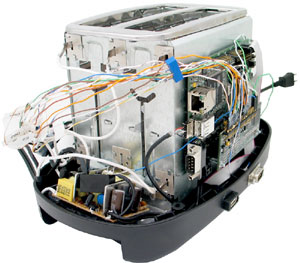 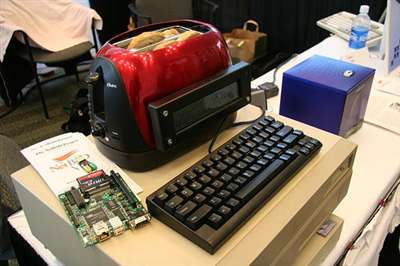 The toaster itself uses a single TS-7200 plus TS-DIO24 daughterboard for toaster control. Two 48mA output pins on the TS-DIO24 directly drive 2 5V relays with 250V/8A contacts. One relay is used to switch 110V to the burner element and one relay is used to switch 25VDC to the magnetic latch. 25VDC is acquired by tapping off some traces on the stock toaster circuit board after the power supply. All traces from the power supply portion of the PCB to the LEDs and buttons were cut and instead attached to the TS-DIO24 and TS-7200 GPIO pins via small jumper wires soldered directly to the components. A separate, small 5V switching power supply is also placed inside the toaster shell to power the TS-7200, TS-DIO24, and LCD off the same 110V line that comes in through the toaster shell. The TS-7200's USB port, DB9 serial console, and ethernet jack are brought out on jacks on the backside of the toaster. The USB port is then used to connect a small PC keyboard to the system which combines with the 5 key wskbd to control the 4x40 LCD display console. USB speakers are attached through the built-in USB hub on the keyboard to allow playing of MP3's while toasting occurs.A full NetBSD installation is on the 512MB compact flash attached to the TS-7200. This includes self-hosted compilers, FTP/telnet server, ssh client/server, crypto libraries, kernel/userlevel debuggers, and standard UNIX utilities. Apache with PHP is also installed on the TS-7200 and presents some CGI programs to control the LEDs, play music, etc... Since the 4x40 LCD is attached as a generic console, manipulating text files is also reasonably possible using installed text editors, though admittedly using vi on a 4 row text display is not particularly productive.

As an aside, we (TS) got in trouble when this toaster appeared in various media following a few of the Linux expo's it appeared in back in 2005. Although we built it as a gimmick, the toaster was a real toaster from Oster and we got a really nasty cease and desist from Oster's parent corporation Sunbeam's lawyers because in some of the pictures, their logo was still visible. Since then, any pictures taken of the toaster have a sticker placed over the top of the toaster logo. We still get an email every month or two from somebody wanting to buy one of these.